Close Your Eyes and BreatheBecoming ' Magic on Ice' 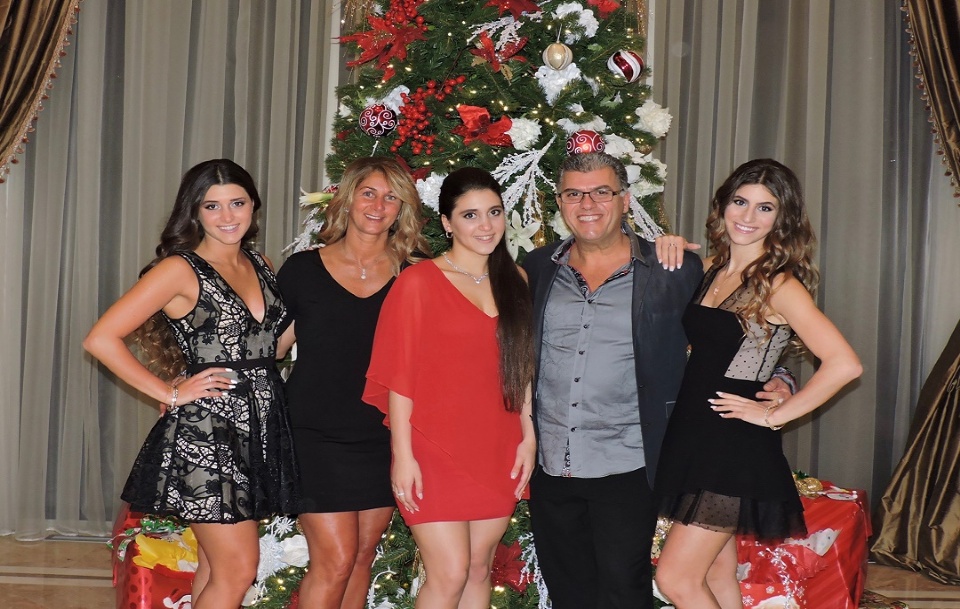 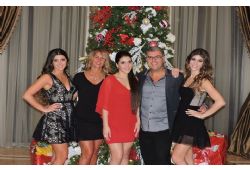 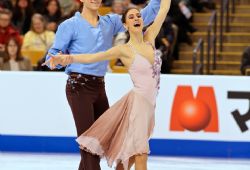 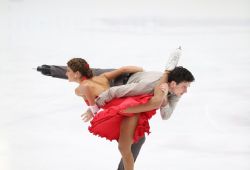 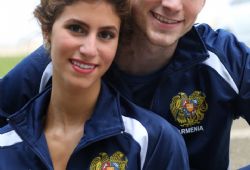 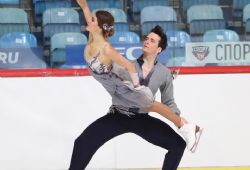 While most four and half year-olds her age were busy playing house, Laval-born Tina Garabedian was busy launching her international skating career, even if she didn t know it yet. Figure-skating was just something she did along with her two sisters, among other sports and activities.

Today, at just 19 years oldwith a skating career already spanning 14 years and countingGarabedian can teach us a thing or two about persistence, dedication and hard work. Having already participated in the 2015 World Junior Championships (with her former skating partner) and the 2016 European Championships, Garabedian and her current partner are on track to represent Armenia in ice dance at the 2018 Olympics.

A slender, soft-spoken young lady, Garabedian exudes a quiet maturity so rarely exhibited by modern teens. On the ice and on the TV screen, however, the wildfire of raw talent and countless training hours comes into play, leaving us with nothing short of  magic on ice , as she has come to be known. Garabedian is currently one of the two youngest female senior competitors in her sport on the international scene.

Early Days
 I remember how cold it was, and falling down a lot, muses Garabedian, as she describes her earliest memories of figure-skating.  But I got back up again and stuck with it. It was her father who coined the term  magic on ice while watching her perform in a competition when she was just five years old. The nickname has stood the test of time.

Her parents, John Garabedian and Maral Dermeguerditchianborn in Lebanon of Armenian heritagewanted their daughters to excel both in school and in physical activity, so that they would become well-rounded individuals.Dermeguerditchian recalls how the idea of putting her girls into figure-skating came about.  I had been watching Josée Chouinard on TV at that time, and was fascinated by the sport, she says.  In Lebanon, skating was not very popular, but I thought it was such an elegant sport for young girls.

Early on, Garabedian trained on the ice every morning before school from 6-7 a.m., when her mother would then drive her to school. During competition season, she would have to leave school on her lunch hour to train some more, and then be driven back to school for the afternoon.  We did this for years, says Dermeguerditchian.  But after a while, it became just too much...eating in the car, studying in the car...and even though she was working so hard, it actually wasnt enough, because she was attending a regular full-time school and not training as many hours as other girls in her category. Garabedian eventually enrolled in a sports-study program to accommodate the extra training hours. Garabedian went on to compete in singles skating until age 14, when she then joined a synchronized skating team representing Canada for a period of one year.  I needed a change. I loved skating, but I just didn t love singles anymore, she explains.

Transitions
After her year of synchronized skating, Garabedian found the sport was simply too uniform, too different from what made skating exciting to her.  I went from competing in singles to competing with a whole team at the same time...It was just too much of having to be exactly like everyone else: same outfit, same hair, same everything, she says.

Again, while most girls her age were focused on the ins and outs of being an average teen, Garabedian was faced with yet more big decisions. She could drop everything and simply live in a normal  home-school-friends teenager bubble, or pursue skating  full out on the international scene. This would mean leaving her school and friends at L'École Arménienne Sourp Hagop and switching to a sports-study program at École Secondaire des Sources to pursue a heavy training schedule, in addition to her high school studies. Garabedian chose the latter.

A crossroads presented itself the year after synchronized skating, when Garabedian was approached by her coaches to partner up with Alexandre Laliberté in 2012, and they formed an ice dance duo that ultimately led to their appearance in international competitions at the junior level, representing Armenia.It was a strategic move, allowing Garabedian to make a large splash internationally, as there were no international skaters representing the country at that time. Even having started ice dance considerably late at almost 15 years old, Garabedian surprised coaches, judges and naysayers from the get-go with how quickly she adapted to the sport.

 Tina and our family were so proud of this, because coming from an Armenian family with all of our history, it was a big thing for us, says Dermeguerditchian.

Garabedian s father recalls seeing her perform at the Junior Worlds Competition and knowing in that moment that the Olympics was attainable.  It was like watching an orchestra, a play or an opera...it just goes on in front of you and it s so beautiful to watch, he says.  It s the grace, the smoothness of the dance and the artistry that s important in ice dance, explains Mr. Garabedian. In the spring of 2015, Garabedian then teamed up with her current partner, Simon Proulx-Sénécal, now 24, and the duo have been competing together for Armenia at the senior level ever since.

School, Training and Social Life
Having just completed CEGEP in business courses, Garabedian is now entering her first year of university at the John Molson School of Business, while training and competing internationally.A typical Monday-Friday schedule involves training on the ice all morning with Proulx-Sénécal, then heading to classes for the afternoon. After classes, Garabedian typically hits the gym for cardiovascular training, and once home, tackles her homework assignments.

Even as a younger teen, she often had to say no to outings with friends because she had to be on the ice early in the morning. High school was a particularly trying time for her, as she found herself being bullied for excelling in school and sports.  They [other students] just didn t understand. There was a lot of jealousy and hate, she says.  But I just knew that I was doing this for me, because that s how I wanted to do it.

Garabedian admits that this hectic schedule leaves little time for socializing, at least not with her school friends who don t compete in skating competitions.  We [skating competitors] don t have the same time and availability as others to just be free and do whatever we want, says Garabedian.  We don t have the best social life, but my family are the most important people so as long as I can see them, it s good, and I m not upset about it. Saturdays and Sundays are for catching up on homework and family time, and giving her training schedule a bit of a break.

When Garabedian completed her CEGEP studies in the Fall of 2016 and set her sights on McGill University, she learned that she couldn t begin a university program in the month of January, due to the university s policy. Rather than take a well-deserved break from school while competing internationally, Garabedian decided to enroll in the John Molson School of Business (JMSB) right away instead, a further testament to her tenacity and work ethic. She may very well still enroll at McGill when the registration period comes around again, but for now will study at JMSB. No rest for the weary, as they say. Perhaps  no rest for the success-driven would be a more apt expression.

Garabedian chalks it up to her organizational skills.  Training keeps me fit and leading a healthy lifestyle...and you have to be extremely organized to be able to juggle training and school, she says.  All my competitions are international, so whenever I miss school, it s never just for a day...more like for a week.

Being a perfectionist can be helpful at times, she says, but her coaches are there to make sure she balances it all out.In fact, during heavy training seasons, the coaches encourage Garbedian and Proulx-Sénécal to consult with a sports psychologist whenever necessary, to ensure that they don t get overwhelmed with the demands of competitions and everyday life.  That definitely helps a lot, Garabedian says.  We learn techniques to destress before and after a competition, and also not to overthink it.

In everyday life, Garabedian has her own way of dealing with potential overwhelm.  Sometimes at night, when I m lying in my bed, I just close my eyes and breathe, she says.  I forget everything and it helps me relax.

It goes without saying that sacrifice and dedication set Garabedian apart from the average sports-oriented teen or young adult.  It s not just on the ice that I have to be 100%. It s in the rest of my life too, Garabedian reflects.

International Competitions
Garabedian and Proulx-Sénécal are now setting their focus on qualifying for the Olympics. To do so, they must accumulate a certain amount of points in their international competitions. Having just returned from Warsaw, Polandwhere they placed 5th overallthey have now qualified for the 2018 World Figure Skating Championships in Milan, Italy. The duo must first head off to Helsinki, Finland, to compete in the 2017 World Figure Skating Championships beginning in March.Their goal is to rank in the top 19 spots, further helping them to qualify for the Olympics.

It takes more than sheer determination and talent to pursue the sport at the international level; it also requires a heavy dose of self-financing for training, travelling and competition fees. According to Mr. Garabedian, each competition can cost anywhere from six to ten thousand dollars. The Garabedian/Proulx-Sénécal duo don t receive financing from Armenia, so everything is out of pocket.

To help counterbalance all the costs associated with competitions, Garabedian s family has set up a website where fans from all over the world can make a donation. Mr. Garabedian says that at the current time, about five thousand dollars has been raised from donations coming in from the U.S., Toronto, Lebanon, Yerevan and London. To follow Team Armenia s progress or to make a donation, visit icedancearmenia.com.

Looking to the Future
Besides seeing her name on the Olympics lists for 2018 and 2022, Garabedian has other hopes and dreams for her future.  I would definitely want to get married and have kids, and have acareer outside of skating, she says.  Once I ve accomplished what I what to achieve with skating, that ll be it. When I stop, I stop.

Though she is still deciding on a career path at the start of her university studies, Garabedian knows one thing for sure:  Like other things in my life, I want to be successful in whatever I chose, and I want to be close to my family and just be happy.

Has Garabedian ever wanted to quit the sport in the past?  I have a lot of passion for the sport, which is what motivates me to get up every morning and train really hard, even when I m tired, says Garabedian without hesitation.  If I didn t love it, I wouldn t do it. 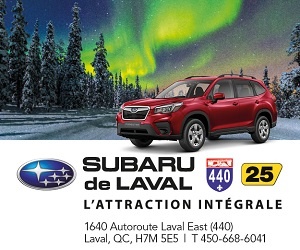 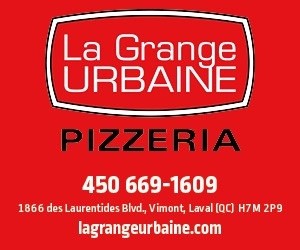